Who Are Our Assholes? 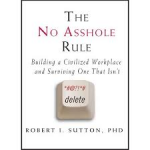 The likelihood is that at some point in our careers, we are going to come across an asshole. This is according to Dr. Robert Sutton, a behavioral scientist at Stanford University and author of The No-Asshole Rule. I was so taken with Dr. Sutton’s book that I asked him if I could refer to it in my presentation for dental professionals, Survival in the Dental Practice Jungle. He told me he hadn’t thought about there being asshole-types in the dental field. Really? I realized as I spoke with him that our assholes come in many forms. It can be anyone. If we feel diminished, demeaned or somehow belittled after an encounter, we are likely dealing with an AH. So who are our assholes in the dental world? Sometimes our coworkers are the culprits. Disregard for personal property (helping themselves to our lunch in the fridge, for example), not pulling their weight or leaving messes for us to clean up, accusing us of an error or omission that they might have made, put downs to build themselves up, or dissing us in front of the boss, all count for qualifying behaviour.

When the boss is discourteous, inconsiderate, barks commands or snaps fingers at you, you might be working for an AH! But hold on for a minute. I have seen cases of young, new practice owners being literally bullied by long term staff of the previous owner. That, too, constitutes jerk behaviour!

Who else? I think we all know that it can sometimes be patients displaying AH behaviour.  Patients who are rude, abusive, sarcastic and demanding can leave us feeling small and inadequate. These patients qualify as jerks!

In my Jungle presentation, I like to tell the story of when I was Office Manager in an OMS office for many years. My boss had a professional colleague who was particularly arrogant (his lawyer). This man believed the world revolved around him and he would be outraged if, when he called the office, my boss couldn’t speak to him because he was with a patient. This man had no time for little peons like me and his temper tantrums always left me feeling shaken and small. I remember reading the words of Eleanor Roosevelt. “No-one can make you feel inferior without your permission.” Those words hit me like a ton of bricks. The next time Mr. Jerk, Esquire, lit into me with his rude arrogance, I told him in no uncertain terms, and very calmly, that his childish behaviour was unacceptable and inappropriate. I am still surprised to this day that he actually backed off, apologized to me, and was never rude to me again. Who’d a thunk?

Assholes can be just about anyone we cross paths with in our work. The trick is to ensure that we are prepared so that we know how to deal with them. That is what a No-Asshole Rule is all about; considering the kinds of behaviours ahead of time that disrupt our work, sap the energy out of us, and leave us feeling diminished;  then making a formal pact to not tolerate them, along with a plan for how resolution will be achieved!

A No AH Rule will change the way you work and cause morale to blossom in your practice. If you want to know how to create your own No-Asshole Rule, give me a call. I make house calls!

Category: UncategorizedBy adminFebruary 11, 2015
Share This Article
Share with FacebookShare with TwitterShare with Google+Share with PinterestShare with LinkedIn